Due to the 2012 Presidential Election, we will be spending the first two months participating in a simulation that teaches students about the election process.  Everyone in class will get a chance to participate in various roles, all starting out by being a presidential candidate, and eventually narrowing the field to two or three candidates.  The rest of the class will become members of a campaign.

Objective 1: Identify the issues that affect the current presidential candidates' campaigns.  Take a stance on each issue and verbalize your position to others with strong support.

We will spend some time in class researching the issues of the day together and in partners (click on the images below to see the tools we will use).  Students will be asked to focus on elementary school appropriate issues.  I will present some issues to the students, explain the issue, and give two perspectives for them to choose from.  Based on their choices, students will fall into either the democratic or republican camps.  Others will discover that they are more bipartisan and may consider running as a third party candidate.  If they choose not to run, they will be serve on a campaign of someone else who is running.  Students will take a screen shot of their results and post it on their ePortfolio, along with a reflection that asks them if they were surprised by their results.

Objective 2: Explain how parties originated, why we have them today, and the traditional values of the democratic and republican parties.  Explain what third parties are and how they fit into the system.

We will start out by talking about how parties started and why they were necessary.  We will continue to talk about their purpose in today's government and the pros and cons of having a party system.  Finally, we will talk about third parties and what affect they have on the two main parties.  (I have some reading materials that support this objective.)  After completing this objective, I will have students write an ePortfolio reflection on their learning.  Here are this year's third party candidates: 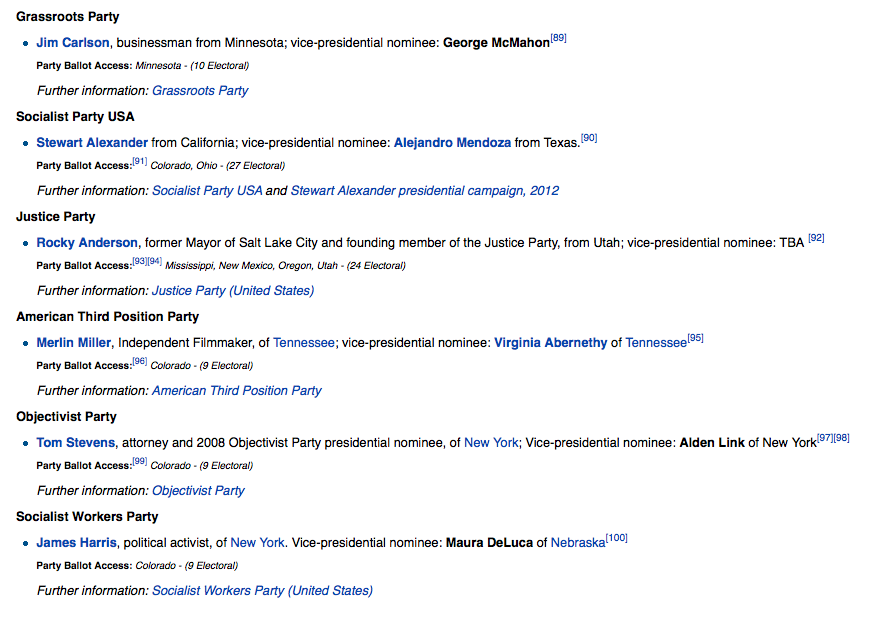 Objective 3: Explain the purpose of a primary.  Identify the best ways to convince voters that your candidate will make the best president.

We will learn about the different types of elections with a card matching game.  We will talk about why the democrats are not participating in a primary this election and why the republicans are.  We will discuss the primary that Mitt Romney (and others) took part in.  The process of the primary election will be explained as well.  Finally, all remaining students running for president will participate in a primary in order to narrow the field down to one candidate per party.  Those who are eliminated, will join the campaigns of those who remain in contention.  Staff members will choose roles and start creating advertisements and speeches for their candidates, as well as promoting themselves as running mates.  We will use Glogster to create signs, Google Docs for our speeches, iMovie to edit campaign commercials, various templates to create bumper stickers, buttons, and T-shirts, etc.  Presidential candidates will privately determine their vice-presidential running mate during this time.

Objective 4: Explain the purpose of political conventions and polls.  Create advertisements that persuade others to vote for their candidate.

Each party will conduct a political convention where their party's candidate for president is announced, along with their choice for vice-president.  Campaign staffs may need to be reorganized and their efforts and speed will have to increase.  Final products will need to be completed and distributed or aired.  Polls will be conducted to determine what their constituents are feeling about their candidate's positions and to determine their status in the election.  We will use Poll Everywhere to create and manage our polls.

Objective 5: Participate as a member of a team that debates the issues of the election.  Write and deliver persuasive arguments effectively.  Write and recite facts that support your team's positions.

Parties will be given the topics ahead of time and will be asked to work as a team to prepare and explain their side of each issue.  Each team will record their formal position on video and will present the video during the actual debate.  Once in the debate, candidates will be given the opportunity to make counter-arguments to their opponents in a live forum.  This too will be recorded and teams can support their respective candidate.  Candidates will be asked to follow their party's positions closely during this debate.  I will get some of my information from the following websites:

Objective 6: Explain how a presidential election works and why we have an electoral college.

Each candidate's team will collaboratively write a concession speech in the event they should lose the election and an acceptance speech in the event they should win.  We will then read about the electoral college (how it came to be and why we still use it today), discuss how a presidential candidate can win the popular vote but still lose the presidency, and graph each candidate's electoral vote count as it happens during a mock election.  The results of the election will be based on historically democratic or republican states, the candidate's positions on the issues, and each team's overall performance in each activity.  Students will color a U.S. map red and blue as states are declared.  Students will repeat this activity on November 7, 2012 in class for the real election.  The concession and acceptance speeches will be performed and recorded.  After a winner is announced, we will synthesize our learning by participating in the Pearson classroom contest entitled, "If I Were President."  Students videotape themselves answering various questions related to their opinions of the political issues of the day.

I will have the kids color this one in as the states are decided. Click on it to download!

The president-elect will participate in an Inauguration in January, complete with a swearing-in ceremony.  It will be videotaped and posted on our YouTube channel.  We will then watch the real Inauguration online.

This will be one of our final summative assessments: 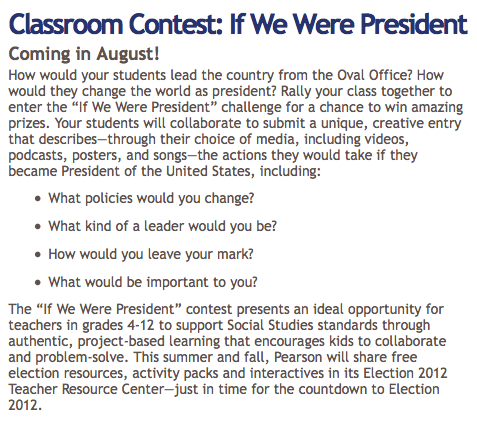 Resources I will be using for this simulation: